Opera Australia's two youngest and most glamorous stars in a sexy, costumed rendition of the Flower Duet from Lakme, the Barcarolle and other hits from stage and screen. Areas of speciality include Classical Ensembles. Australian mezzo-soprano Victoria Lambourn studied at the Royal Northern College of Music (RNCM) in Manchester, graduating with a Bachelor of Music (with Honours), a Postgraduate Diploma in Performance and a Master of Music in Performance.
Read More…

ARIA-winning brothers, Slava and Leonard Grigoryan have played with orchestras and with Festivals around the world. Baroque, classical – even the Beatles – can be featured! Areas of speciality include Classical Ensembles. Slava and Leonard have been performing professionally as a duo for about twelve years. Although they have performed much of the standard guitar repertoire for two guitars, they are committed to expanding the classical guitar repertoire through new arrangements, collaborations with contemporary composers, and their own compositions. In 2006 they made their debut at the Wigmore Hall in London. They have performed together in many countries, including Russia, Austria, France, Italy, Germany, Hungary, Estonia, and the US. They regularly tour Australia as a duo, performing with orchestras and at music festivals.
Read More…

Over the past 28 years, the Australian Girls Choir has delighted audiences across Australia and around the world with performances at major national and international events, on television and in recording studios; to become a much-loved Australian cultural icon. Areas of speciality include Classical Ensembles. They challenge the traditional view of choirs, and are known for their ability to excite audiences with impressive choreographed routines, vibrant performance costumes and exquisite singing. They have a diverse and extensive repertoire including much loved Aussie tunes, upbeat and inspirational items, Broadway show numbers, songs from other cultures and of course Christmas Carols! Event organisers often comment on the girls professionalism, impeccable behaviour and their wonderful ability to connect and interact with different audiences.
Read More…

Simon Tedeschi is quite often described by respected critics and musical peers as one of the finest solo artists in the world making the young pianist's mark on music both undeniable and admirable. Renowned especially for championing non-standard repertoire, Tedeschi enjoys a full international performing career. Areas of speciality include Classical Ensembles. Tedeschi first performed a Mozart Piano Concerto at age 9 in the Sydney Opera House. He has studied piano in Australia with Neta Maughan for 10 years (between 1990 and 2000) as well as in London with Noretta Conci and Boston with Peter Serkin.
Read More…

Take an enchanting evening with Australia's most glamorous opera stars. Areas of speciality include Classical Ensembles. Jenny Liu and Andrew Jones perform opera’s finest melodies. Their song book includes all of your operatic and musical theatre favourites, from Carmen and La Traviata to Miss Saigon and Phantom of the Opera.
Read More…

The world's greatest Barber of Seville, José's beautiful voice makes audiences swoon to Granada and other favourites. He sings beloved tangos from his native Argentina and the brilliant Figaro! Figaro! Areas of speciality include Classical Ensembles. Australian baritone José Carbó was born in Argentina of Spanish and Italian descent, and moved with his family to Australia at an early age.

His European début was in Italy in 2005 at the Teatro dell’ Opera di Roma where he sang the title role in Le nozze di Figaro. That same year, he sang the title role in Il barbiere di Siviglia for the Teatro Real in Madrid; he was re-engaged by this theatre to sing Belcore in L’elisir d’amore in 2006; these performances led to an engagement as Dandini in La Cenerentola for the 2007 Mozart Festival in La Coruña – in Spain’s northern region of Galicia. He made his La Scala debut in 2009 in Il viaggio a Reims and his American debut in 2011 as Rossini’s Figaro in Seattle.

Shaula is one of Australia’s leading singer-harpists. Her golden voice (Phantom of the Opera) teamed with her extraordinary classical musical talent (concert pianist, composer, arranger) reaches an ethereal level when teamed with the glorious sounds of the ancient Celtic harp. Areas of speciality include Classical Ensembles. Shaula harpist spins a special type of magic at weddings, corporate events and society dinners.
Read More…

Sirens of Strings are an all-talented, all-female string troupe that perform elegant acoustic music in a background role or take to the stage for a spectacular amplified feature spot. Areas of speciality include Classical Ensembles. They are in high demand as musicians for headliner concert tours and featured musicians for select corporate events. With serious runs on the board in the classical music scene and extensive experience in the pop and rock industry, the The Sirens are equally at home on the concert platform as in a rock arena.
Read More…

Creating a new musical genre is a feat to which few musicians can lay a genuine claim. But when the talents of a pop diva were merged with one of Australia's leading operatic tenors, a new category of 'Orchestral/Pop' was born and with it, an exciting one-of-a-kind musical act with a truly epic new album. Areas of speciality include Classical Ensembles. Factor in that they are brother and sister, and it’s easy to see why occupies such a unique place in the international recording arena. After forging successful musical careers independently over the past decade, Anna-Maria and Rosario La Spina came together for their debut album, Always You.
Read More… 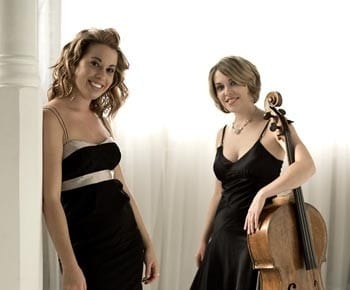 Strelitzia Duo provides best of both worlds – the elegance and class of the Cello and Piano performing beautiful classical music, as well as the charm of classic Jazz, the buzz of Broadway and the vitality and soul of contemporary favourites from The Beatles to Ben Folds, and everything in between. Areas of speciality include Classical Ensembles. Strelitzia Duo can provide featured or background entertainment tailored to virtually any event. They provide personalised, flexible and professional entertainment and add a touch of style and excitement to any event.
Read More…