After 20 years as half of Australia’s favourite musical comedy duo, The Scared Weird Little Guys, Rusty Berther (the little one) continues the musical hijinks and slick silliness that established The Scaredies as one of the most sought after corporate acts in the country. 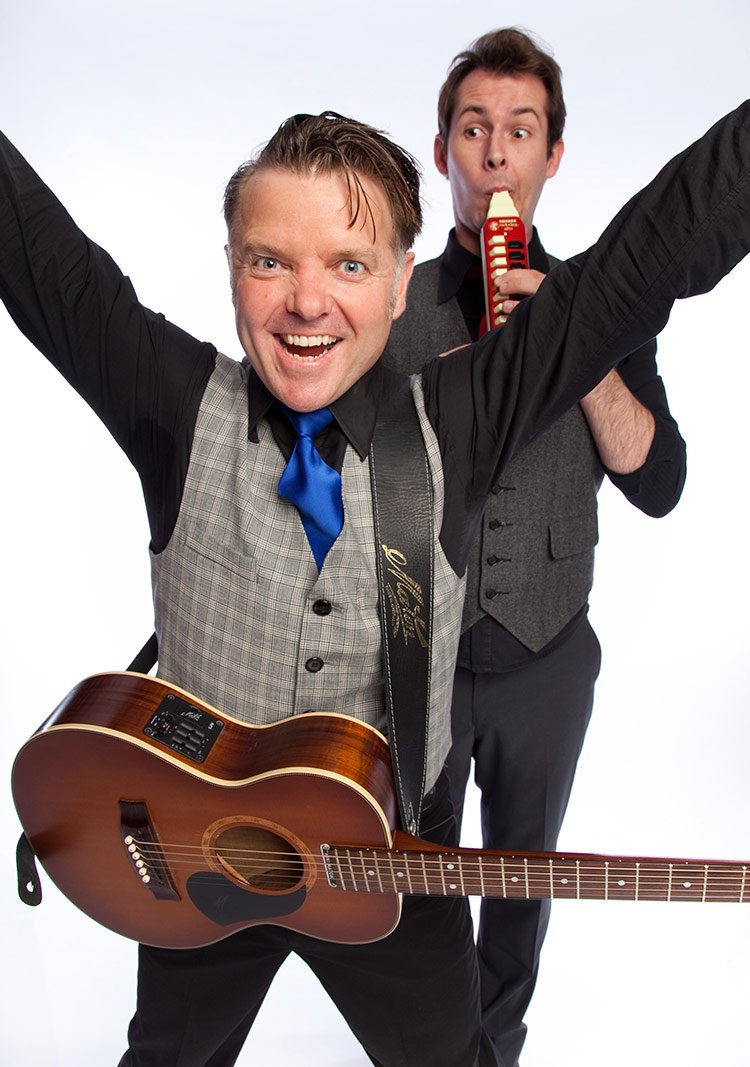 Together they continue the tradition of high energy musical skill and heavenly harmonies, blended with quick witted improvisation and song parodies that will entertain and amuse any audience.

In 1986 after a stint as a burger flipper at McDonalds and a few years as a roof plumber, Rusty moved to Melbourne from his native Queensland in search of a career in entertainment.

He first joined a barbershop quartet called Four Chairs No Waiting, playing festivals and shopping centres around Melbourne to great acclaim, as well as a four month stint at Expo 88 in Brisbane.

Four Chairs was where Rusty first met John Fleming and together they joined another successful a-capella group The Phones, then in 1990 started the Scared Weird Little Guys.

Rusty and Another Guy were hilarious! Best finish to a conference ever!PACKTA Conference

The Scaredies have just finished an incredible career which included an astonishing number of shows – over 4500 in countries all over the world – festivals, comedy clubs, theatres, universities, countless television and radio spots, corporate events, children’s shows and everything in between. However, all good things must come to an end and Rusty and John went out on a high with a successful national farewell tour which left their legions of fans shouting for more.

An exciting future now lies ahead with Rusty working on various television related ventures including a documentary on his trip to Antarctica to run a marathon!

Rusty is an accomplished, all round entertainer and musician. He plays a variety of instruments including guitar, ukulele, banjo, harmonica and double bass. He is a skilled vocalist, comedy writer, musical arranger and bandleader. Years of diverse performing situations has given him the ability to work under any circumstances – from noisy street shows to corporate awards nights, from nerve wracking live television to a packed MCG.

Mike is best known to Australian audiences for his portrayal of Paul Keating in Casey Bennetto’s hugely successful production of Keating! The Musical. At the end of August 2008 Mike completed three years of touring the country as the star of this seemingly unstoppable show.

Before Keating! came into his life Mike had been performing as an actor and musician for nearly fifteen years, making appearances in a string of independent, Melbourne-based productions including Six Degrees of Separation, The Art of Success, Huge, Speaking In Thongs, Still and Face2Face. Mike has also provided sound design and musical scores for a variety of theatre companies including Red Stitch Actors Theatre, Theatre In Decay, St. Martin’s Youth Arts Centre and Theatre@Risk.

Mike also performed in Casey Bennetto’s show A Largely Fanciful History Of The Spiegeltent as part of the 2008 Melbourne International Arts Festival.

Rusty and Another Guy

Book Rusty and Another Guy