Justin Jones (affectionately known as Jonesy) is one of Australia’s premier motivational speakers and extreme adventurers. Constantly pushing the boundaries of human endurance he has undertaken a number of large-scale expeditions over the past 14 years. Two in particular have captured global acclaim and attention. 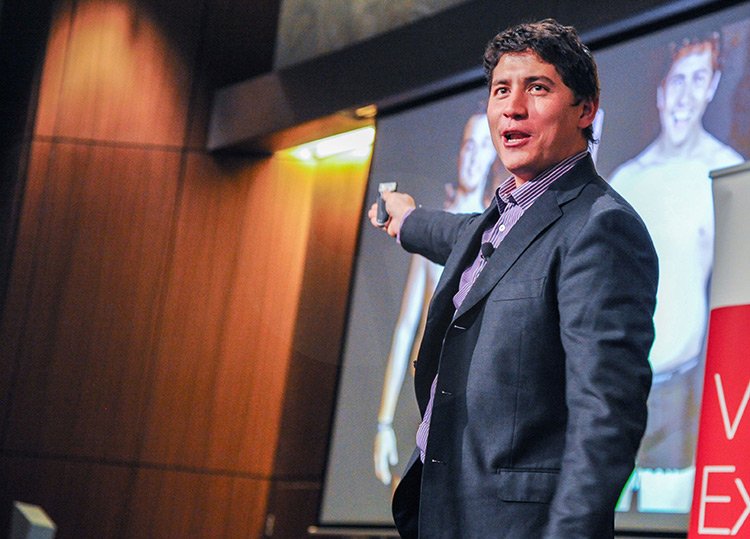 Jonesy is one of Australia’s premier public speakers and adventurers who is constantly pushing the boundaries of human endurance. Global audiences are demanding to hear the story of how he succeeded in completing two of the greatest adventures of all time. To date he has shared their story with over 250 000 people including many of Australia’s ASX200 companies, business leaders and professional sporting teams. 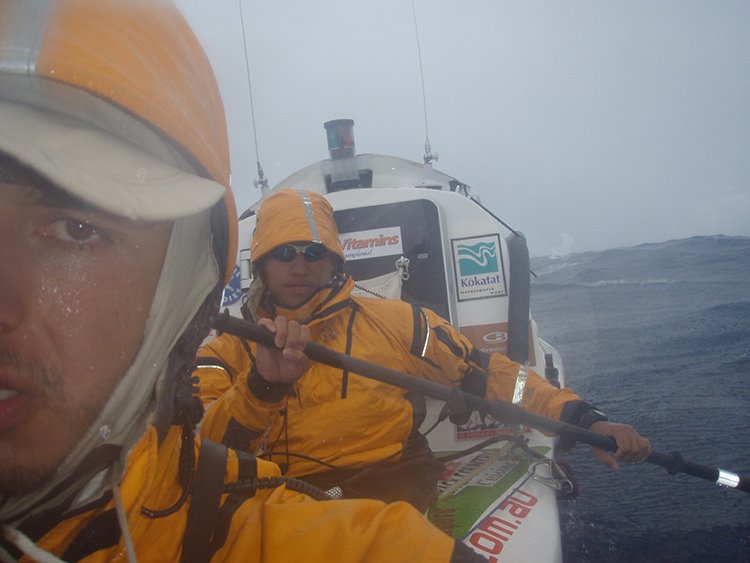 Jonesy’s presentation is the perfect compliment to open or close a conference, motivate staff or provide an inspirational after dinner speech. His workshops highlight lessons learnt from the forefront of adventure and how they are applicable to business and life in general. Stunning footage and imagery have been craftily moulded to convey key messages that all can learn from.

Jonesy is highly motivated to work with you in creating the perfect keynote for your next function or conference.

…one of the greatest adventure stories of this decade!Dick Smith

In 2007/8, Jonesy along with expedition partner, James Castrission paddled a kayak unsupported from Australia to New Zealand. The journey was anticipated to cover 2200 km and take approximately 40 days.

On the journey however they were beset by sharks, 10 metre (33 ft) waves, storms, howling winds, adverse currents and extreme food and sleep deprivation. After paddling 3318 km over 62 days they finally staggered ashore setting a world record for becoming the longest supported double kayak expedition and the first people to cross the Tasman Sea by kayak.

Not only was this expedition a huge physical challenge but a phenomenal logistical puzzle. Jonesy spent over 3.5 yrs putting together the plans and processes, designing and building the kayak, and training/upskilling for this expedition. 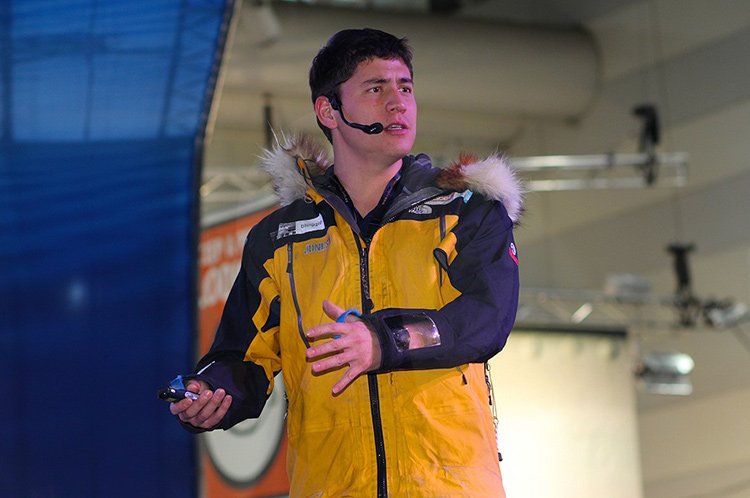 An incredible feat of endurance that is a testament that surviving hell is all about heart, grit, humour and friendship.Bear Grylls

In 2011/12 he then skied from the edge of Antarctica to the South Pole and back over 89 days (again with James) setting another world first. This was the first time this had been completed, in an unsupported and unassisted manner. It became the longest unsupported polar expedition ever undertaken.

Pulling loads that started at 160 kg and in temperatures as cold as -40 C, they skied 2275 km struggling with unseasonable blizzards, whiteouts, frostbite, crevasses, and severe food deprivation. Over the course of the expedition Jonesy lost a staggering 30 kg (66 lbs) of body weight. This adventure set a new benchmark and raised the bar of polar exploration globally.

Justin has completed a Bachelor of Advanced Science with Honours at the University of New South Wales, after attending Knox Grammar School in Sydney. He has also attained further qualifications with Diplomas in Event Management and Outdoor Recreation.

Jonesy can also add producer to his repertoire. Documentaries that he has produced and directed have received critical acclaim, winning 16 international film festival awards. They have been played in every corner of the planet. He has also presented in and produced a TV special for the National Geographic Channel in North America. Especially impressive considering he has no formal training in film production!

A gloriously ordinary bloke, Justin Jones is the perfect example of how determination, detailed planning and foresight can enable the most ‘normal’ of us to undertake the most extraordinary feats. 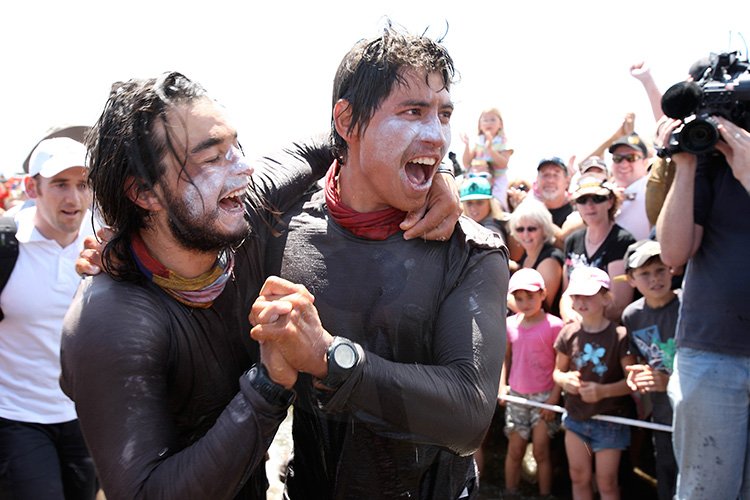 Since returning from the Tasman expedition Jonesy has been on the corporate and public speaking circuit, giving keynotes highlighting pertinent themes to business and facilitating workshops globally, to over 220,000 people. Humble, charismatic and inspiring – he leaves you with the belief that anything is possible.

A colourful character… born with that compulsion to do something crazy, something INCREDIBLE.Alex Baldwin

His presentations are enhanced by jaw-dropping video clips and stunning photography from his adventures. The old saying a picture paints a thousand words only partly explains the profound impact his multi-media has. Because much of it is unique and beautifully captured – it sticks. People remember the imagery, and the inspiration long after the conference is over.

I was on the edge of my seat for the entire presentation. One moment in tears of laughter, the next tears of despairJackie Timmins - MD, Travelscene American Express

Jonesy’s presentation is perfect to open or close a conference, motivate staff or provide an inspirational after dinner speech. This young and savvy adventurer has created two unforgettable presentations. Stunning footage and imagery have been craftily moulded to convey messages that all can learn from.

Daring to dream then riding out the storm

The story of why two young successful Aussies sacrifice everything to achieve a seemingly impossible dream; to become the first to paddle across the Tasman Sea. In this mind-blowing account, Jonesy shares with the audience what life on the Tasman was like; the good, the bad, every lesson learnt, and every wave in between.

To hell and back: A journey across a frozen wasteland

Starting with very limited experience, Cas and Jonesy spent years researching, consulting with international experts, training in the Arctic and NZ, and rehearsing the skills needed to survive in the highest, driest, windiest and coldest place on Earth.

On the ice they were pushed to their very limits and almost didn’t return; Antarctica was a ruthless mistress. Staring at the brink of death and defeat, they were able to methodically refocus and regain control over their fate and ultimately, succeed. The end to this journey will move the stoniest of hearts.

Jonesy craftily weaves themes learnt through a life of extreme adventure into all his presentations. His practical business and university science foundation allows him to draw on relevant anecdotes to convey crucial lessons pertinent to business. Some of these themes include:

Depending on the client’s needs, he can subtly touch or make these themes more explicit.

Jonesy’s workshops strongly focus on interactivity and participation. Using the vessel of his expeditions he works tirelessly to help you achieve the goals determined prior to the workshop. More than anything he wants your team to walk out of the room empowered and willing to apply the lessons he has learnt from the most hostile environments in the world.

Conquering the Tasman: The sum of many parts

Focusing on the kayak across the Tasman, Jonesy explores in depth, the lessons learnt from this expedition. Your team will go on a journey running down every wave and crisis met, and facing the decisions that had to be made by Cas and Jonesy in the middle of the Tasman Sea. Your team will make decisions and then analyse what went wrong and why.

Antarctica: an expedition into resilience

Down in Antarctica, you have to be reliant on only you and your team. All the plans that you have put together over the previous 3 years culminate in the next 3 months. In a blizzard, there is no rescue. This workshop focuses in particular on the consequences of one’s actions and the resilience needed to overcome crippling adversity.

Focusing on the 12 lessons that he has learnt from Adventure, this workshop uses both expeditions and all his experiences to take the audience on a fun and informative journey through what adventure has to teach us all and how we can apply it in our lives.

Jonesy has partnered up with management consultant and master facilitator Steve Lennon to create a punchy workshop aimed at the leadership journey. It focuses on the fact that no leader is perfect but has to adapt to each stage of business/expedition they are in.