The Hoodoo Gurus got together in Sydney on January 1st 1981 to play their first “show” in an inner city lounge room. Core members are Dave Faulkner and Brad Shepherd who are joined by Kimble Rendall, Rod Radalj and James Baker. No bass player. When the band sign with Big Time Records they consist of Dave, Brad, James and bassist Clyde Bramley. 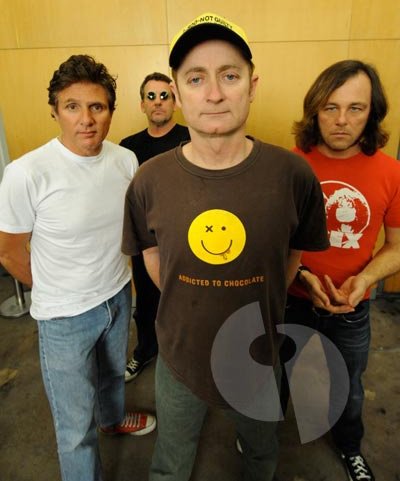 Their first single was “Leilani”, followed by “Tojo” and “My Girl” which were both released in 1983.

Album number 1 “Stoneage Romeos”, was named Australian Debut Album of the Year and was released in America where it stayed at number 1 in the Alternative/College charts for 7 weeks, becoming one of the most played albums for the year on the college network. Drummer Mark Kingsmill joins in time for their first tour of the United States. The Gurus take on Michael McMartin as their manager.

Seven albums later and one week prior to leaving for another tour of Brazil, the Hoodoo Gurus issue a press release announcing that 1997 will be their last year together as a band. There are no reasons for calling it a day other than it just feels like the right time to do so. The press release ends with: “The Hoodoo Gurus wish to thank all of their fans who have supported them over the past fifteen years. It’s been quite a trip.”

After a four-year hiatus from touring the band reform to headline the premier all Australian artist music festival, Homebake, in Sydney on December 8, 2001. Twenty-two thousand people attend. This is followed in 2001 by the release in the UK and Europe of the definitive singles and b-side collection entitled “Hoodoo Gurus – Ampology”. The album is released in Australia in November 2003.

In the fall of 2003 the song “What’s My Scene” is taken as the theme for the NRL Football season under the reworked lyrics “That’s My Team.” The campaign is the most successful ever undertaken by the NRL and the option for a further three years is exercised.

Enjoying their own company and the music they are playing the Hoodoo Gurus reformed to perform at the NRL Grand Final in October to a crowd of eighty thousand. Following this and performances on the Big Day Out the band signed a new recording deal with EMI Records and released a new album in March 2004 entitled MACH SCHAU.

In 2009 the band sign a new recording deal with Sony Records and commence work on studio album 9 – “Purity Of Essence” again working with Charles Fisher as co-producer and having their favourite mixer, Ed Stasium, again look after putting it all in the right places. The first single ‘Crackin’ Up’ is picked up nationally within days of release and the album debuts in the top 20. The album is released in the US, UK, Spain and Brazil in time for the departure mid-2010 on yet another trip around the world.

The Hoodoo Gurus continue on their wonderful journey!