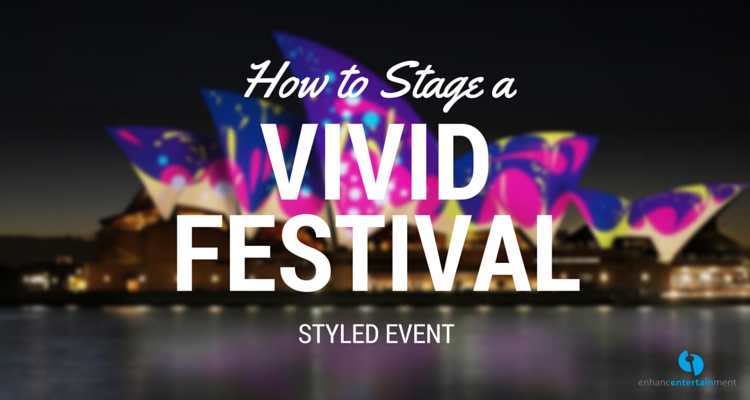 With Vivid Sydney reaching new heights each year, we thought it fitting to explore how you can create a similar theme at your corporate event.

Our talent has featured at Vivid Sydney since it’s inception in 2009, and this year is no exception.

We give you an inside view of Vivid Sydney, then show you practical ways to integrate key elements into your business event.

Read on below, or skip to the topic:

What is Vivid Sydney?

Imagination is everything. It is the preview of life’s coming attractions.Albert Einstein

In 2016, a record 2.31 million people immersed themselves in light installations, exchanged ideas with creative thinkers and experienced international music artists.

With the official name of Vivid Light, Music & Ideas Festival, Vivid has been a permanent fixture on Australia’s cultural calendar since 2009.

It’s an event of lights, music and ideas that includes outdoor lighting installations and sculptures and a cutting-edge music program. 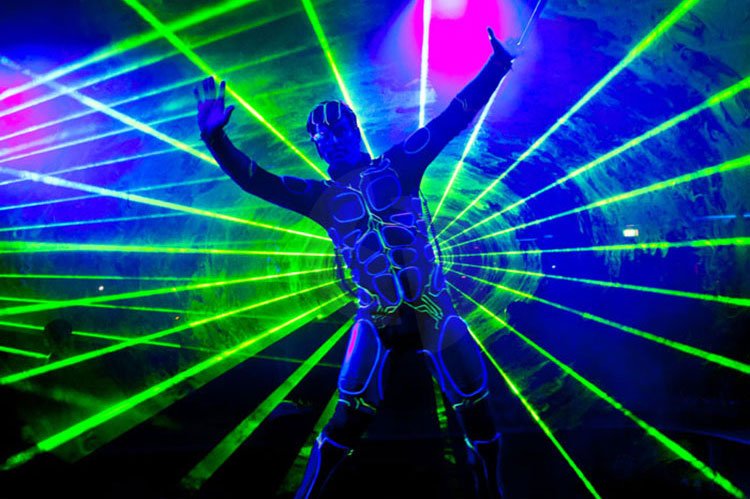 This year the festival has taken on an even larger footprint. You may need to travel further for the complete Vivid experience, but it’s definitely worthwhile.

There is still plenty to see and do in Circular Quay, Walsh Bay and The Rocks precincts, but venturing further afield does have its advantages. Delightful surprises await those who venture into Martin Place, Pyrmont Bay and Chatswood. Best of all, it’s practically all free.

While we do miss the wonderful white grand piano where passers-by could play a tune, even more exciting are the new Piano Stairs outside the AMP building. The artists say it’s a “fun way to encourage physical activity, teamwork and collaboration, Piano Stairs are a toe-tapping way of making music and shedding a few calories at the same time.” Nice!

If you’ve ever dreamt of running your own lighting spectacular, get yourself to Mission Control at Pyrmont Bay park. Staged by the uber-talented crew at Fourth Wall this is a light show that puts most nightclubs to shame. You select your style of music, then control the entire light show via two huge but easy to operate touch-screen interfaces. Running Mission Control feels like you’re flying the Starship Enterprise. Best of all, you can check out your awesomeness afterwards in a video of your show on their website. Tres cool.

The light projections have reached new heights (was that a pun?) on the Sydney Opera House, the MCA – with the rather descriptive name of Mechanised Colour Assemblage – and Customs House. No longer just static images, these projections have evolved into impressive moving canvases that evoke and mesmerise passers-by. In the case of Customs House you also get to enjoy a cute short story wrapped in a film. 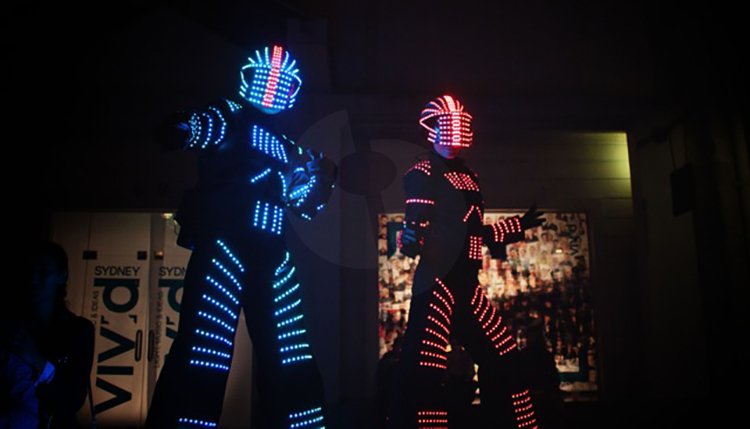 On Darling Harbour, a water and laser light show called Laser-Fountain Water Theatre is in rotation every 30 mins. While the combination of light and laser effects were impressive in 2015, the full potential was marred with choppy edits and a lack of ‘flow’ in the soundtrack. If the festival’s history is a guide, we think 2016 will bring a vastly improved experience.

Daniel Johns of Silverchair and Dissociatives fame delivered his long-awaited solo album at Sydney Opera House, 28 & 29 May, and it did not disappoint.

Cameroon-born music virtuoso and multi-instrumentalist Richard Bona lived up to the hype as well. He performed the kind of optimistic funk-inspired fusion that gets in your blood and leaves you feeling all is good with the world. There were a few George Benson and Jaco Pastorius-inspired moments for jazz fans as well.

Multiple Grammy-winning musical prodigy Esperanza Spalding (US) stages an ambitious art-pop performance based on her alter-ego, Emily. Spalding has performed with Herbie Hancock, Stevie Wonder, Janelle Monae and Prince, and her latest album was co-produced by David Bowie’s main collaborator Tony Visconti. We anticipate “Emily’s D+ Evolution” will be nothing short of a groundbreaking new project. 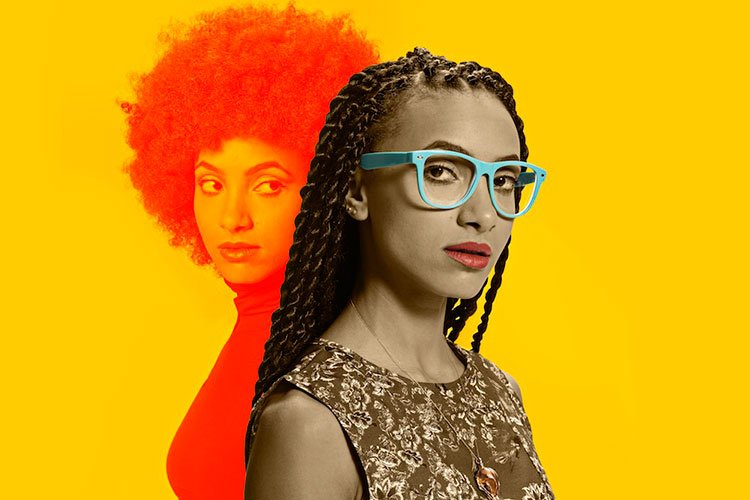 Australian music icons Tex Perkins and Murray Patterson (AU) are teaming up for two intimate shows at Camelot Lounge. This event is not to be missed!

Hardcore jazz fans, get ready. Wayne Shorter (US) is coming. Many of Shorter’s compositions are now jazz standards, and he’s bringing his quartet. Just don’t expect him to crank out tunes from jazz-fusion band Weather Report – or any other of his classics for that matter. Shorter is known for pushing the boundaries of experimental music. Expect an enlightening performance straight from the heart.

So how do you translate the tech-savvy, sometimes romantic, always enjoyable experience of Vivid into a corporate event?

The ideas below will help inspire you to design a light-filled interactive experience to delight all your attendees. And remember, if you want help, feel free to chat with us about your event objectives.

Since 2009, many of our talents have performed at Vivid. Most enjoy repeat performances year after year.Alison Clarke, Director

Originally commissioned for Vivid Sydney, The Replicants give a fresh take on interactive performances, with stunning LED outfits that change colour and futuristic graphic poi that “paint” images with the aid of some very clever computer generation.

They may seem a bit off-topic at first, but Swimsync are actually the Australian Olympic Synchronised Swim Team. If you’re fortunate enough to have a swimming pool at your venue, consider integrating them with 3D Laserman and a custom-produced professional DJ to create a truly spectacular corporate stage show. 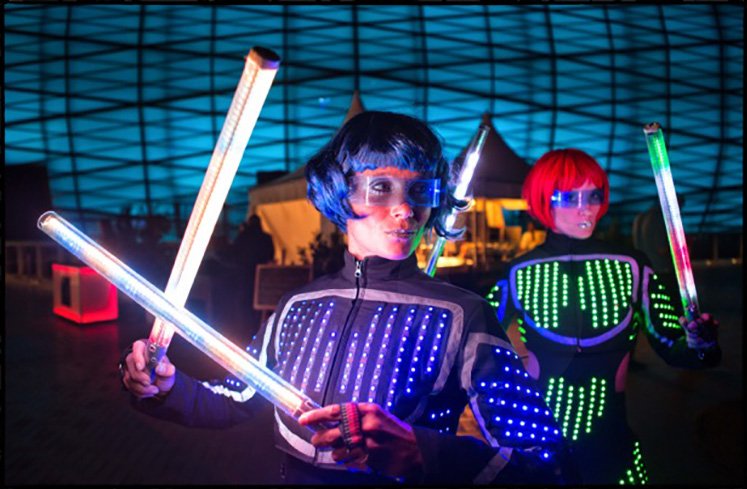 Atsui Fire & Light Show incorporate traditional fire elements with UV and special effects to create a stunning act that can be used as a stage show or roving performance.

Light Fantastique is another variation on light and colour that holds endless possibilities for a creative atmosphere.

Create an impact with the lights and sounds of Laserstix.

Bring food and beverage service to life with the fully interactive Crystal Stilts. They make a fantastic talking point and ice-breaker for networking and corporate events alike.

Blow your guests away – figuratively – with the incredible T8 Robot. A combined laser light show and Terminator in one unique package, you can surprise, delight and scare your attendees all at the same time. It may not be for the faint-hearted but it will be talked about long after the event is over.

Billed as “the essence of fluorescence”, Luminescence blends balance and poise with cutting-edge UV and LED “flags” for an impressive stage show.

White Fire will take you on a romantic journey of light. Delicate and poised, the White Fire girls can work on podiums or move amongst guests for maximum interaction.