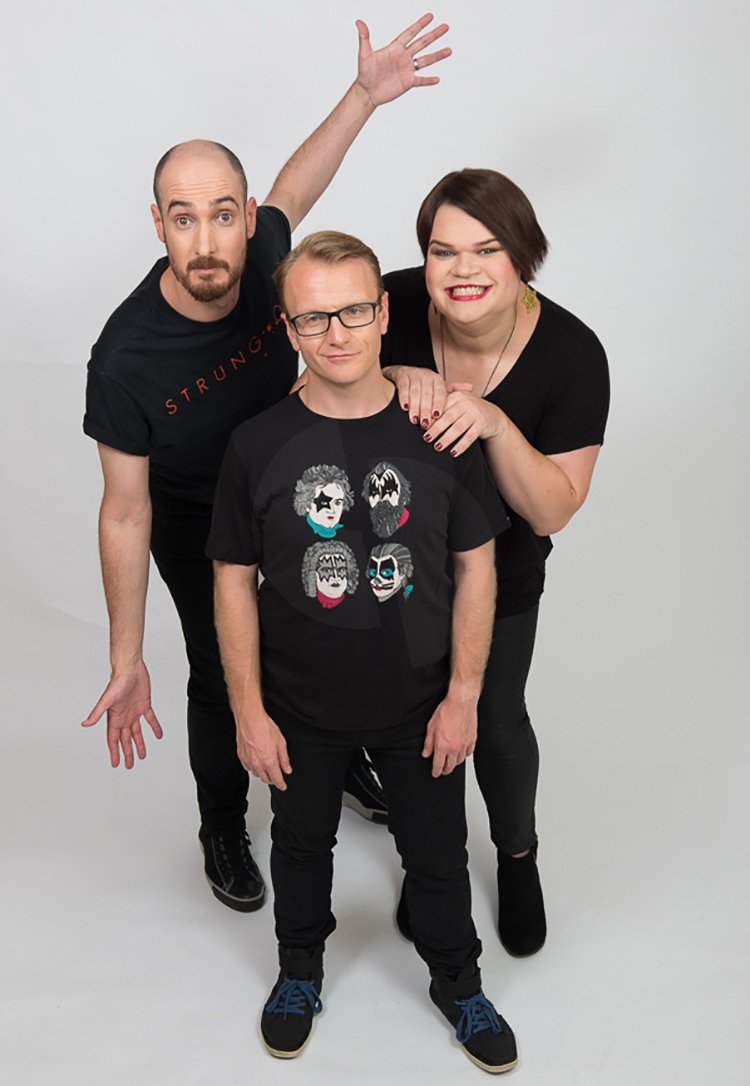 They are The World’s Most Awesomest Comedy Band. In the short yet incredible time they have been a band, they have done literally so much stuff. Their 2008 Melbourne International Comedy Festival show “The Axis of Awesome Comeback Spectacular” won them a Moosehead award, and played to packed houses and rave reviews.

Their musical lampoons really hit the mark… they had the audience in stitches, hooting for an encore – 4 stars The Age

Not content with blowing the minds and bodies of Australia crowds, they took the “Comeback Spectacular” to the 2008 Edinburgh Fringe Festival, to both commercial and critical success. They since returned in 2009 to sell out their entire 25-show season with their new show, “Infinity Rock Explosion”, which critics called “a superbeast of high energy, high impact comedy” (chortle.co.uk).

I enjoyed the show so much I bought the album Scissors, Paper, Rock! Kate Copstick, The Scotsman

They have performed to sold out crowds and rave reviews across Australia (including the Melbourne and Sydney Comedy Festivals and the Adelaide Cabaret Festival), appeared on Good News Week (Channel 10) and The Footy Show (Channel 9) and gathered a legion of fans worldwide. Their YouTube video of their “4 Chords Song” currently has over one-and-a-half million hits and has resulted in a barrage of emails asking what the chords are.

Jordan Raskopoulos: Lead vocals. Star of stage and screen, Jordan is best known for his work on “The Ronnie Johns Half Hour” on Channel 10. His memorable characters and humorous lines were both memorable and humorous. Currently a National Theatresports Champion, Jordan was nominated for Best Newcomer at the 2007 Melbourne International Comedy Festival for his one-man show, “The Adventures of the Man With the Dominant Claw”. Jordan enjoys Snickers bars and the music of David Bowie.

Benny Davis: Keyboard, vocals. A classically trained musician, Benny brings some class to the Axis. And a portable keyboard. As an original member of the sketch comedy troupe “The Delusionists”, Benny was a stand out in their 2007 Melbourne International Comedy Festival Show. A regular cast member of almost every improvised comedy show in Sydney, Benny is a virtuoso on the keyboard. Benny enjoys Guitar Hero on Nintendo Wii and the music of Billy Joel.

Lee Naimo: Guitar, way way back up vocals. One of Sydney’s best improvisers, Lee has made stuff up while touring Australia and internationally. Along with Jordan, Lee is a current National Theatresports Champion, and he is co-creator of the hit live show, “Scrabble Unscripted”, which was a sold-out success at both the Melbourne and Cracker Comedy Festivals in 2006, 2007 and 2008. Lee enjoys sunshine and the music of the Dixie Chicks.

Axis of Awesome leave men laughing and women gasping (and also laughing), and before long you’ll be laughing and/or gasping, depending on your gender.

Get ready to have your face blown off its hinges.